Secretariat Level : The Deputy Chief Minister holds the portfolio of Registration and Stamps Department. The Principal Secretary to Government, Revenue (R&S) heads at the Government level. He is assisted by Deputy Secretary and Assistant Secretary. There are theree Sections dealing the subject.

State Level: Commissioner and Inspector General is the Head of the Department who acts as Chief Controlling Revenue Authority (CCRA). The C&IG is assisted by 1 Additional I.G, 1 Joint IG and 3 Assistant IGs.

Zonal Level:Deputy Inspector General is the Head of the Zonal administration which consists of 1 or 2 districts usually. He is the appointing authority and disciplinary authority for the Sub-Registrars and Senior Assistants. For administrative convenience 6 registration zones are created in the State.

District Level: District Registrar is the Head of the District administration. He is the overall in charge of the district administration. He is the appointing authority for Junior Assistants and the other lower staff. The DR is the Registration authority for Societies and Firms in the district. For administrative convenience 12 Registration Districts are created in the 10 Revenue Districts in the State. To exclusively concentrate on Internal Audit and Market Value implementation, a unit under the District Registrar (MV&Audit) is constituted. 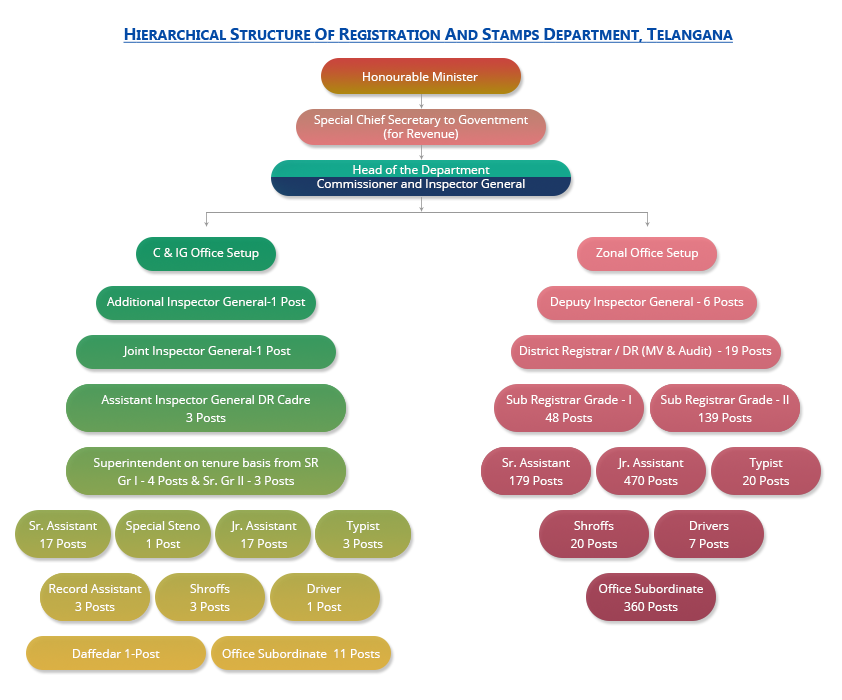